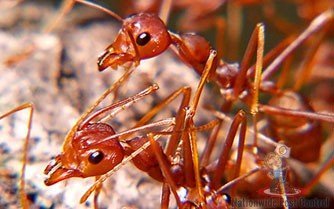 Ants are one of the most prevalent animal species in the entire world, having colonised almost every landmass on Earth. There are more than 12,000 classified ant species in the world, out of a possible 22,000 in existence. These insects live in colonies that function somewhat like human societies, with division of labour and communication between individuals allowing them to live in an organised fashion and solve difficult problems facing the colony. Ants exist in large numbers everywhere, even in urban environments such as cities. Ant colonies are extensive and difficult to root out, so if you are looking for ant control, Sydney, or ant removal, Sydney,the professional staff at Nationwide Pest Control are the best people to call. 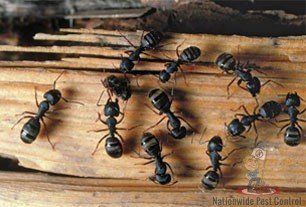 There are many species of ants, which means varied characteristics. In general, ants vary in size from 0.75 to 55 millimetres, and can vary in colour from red to green to black. Sometimes, insects appearing to be ants with a white colouring can be spotted around the home. These ‘white ants’ are not ants at all; rather they are invasive and damaging insects known as termites. For information on white ant control, Sydney, and white ant removal, Sydney, head to our page on Termites.

Ants are made up of three distinct body segments, all of which are covered by a hard exoskeleton that protects them from damage. Ants sense threats and find their way around using their compound eyes and their pairs of antennae, which detect chemicals, vibrations and changes in the air.

Ant colonies operate as a superorganism, meaning that although they are made up of many individual ants they all work together towards untied purposes, such as nest building, food gathering and colony defence.

When threatened, most ant species respond with a bite to the threat. Ant bites can be a health risk, depending on the species of ant; there are some ants with extremely painful bites that can cause side effects such as blisters and rashes. Even the relatively harmless ant species can cause such side effects with their bites, though less painful in nature. Some species of ant also trigger allergic reactions through their bites, so ensuring there is no danger to family and friends with such allergies is important.

Ants can also be an inconvenience due to their habit of seeking out sustenance within a home, leading them to consume and potentially contaminate food within a home, as well as make holes in house structures in order to travel.

Noticing large numbers of ants in and around your home is a clear indicator of ant infestation, as well as finding ant nests and pathways.

Ant infestations can be difficult to eradicate, but must be controlled to prevent them from running amok in and around your home. If you are having issues with ants and require ant control, Sydney, or ant removal, Sydney, then contact Nationwide Pest Control on 02 9546 7022, or through our website. We guarantee services that are 100% satisfactory, as well as environmentally friendly and safe for you family, friends and pets. Give us a call!